Aamir Khan writes a blog and calls Sharukh Khan a dog ! Actually, Aamir has named his dog Sharukh and has “Sharukh licking my feet”.

I hold no brief for either of them as my tryst with Hindi movies began courtesy my classmate Ramu in the 70s and ended when the magical combination of RD Burman, Kishore Kumar and Rajesh Khanna faded away. More of this later.

Historically, dogs have been associated with memorable brands 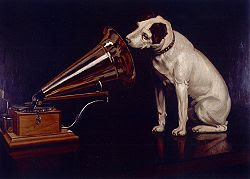 Nipper, the dog listening to His Masters Voice (HMV) became an endearing symbol with all music lovers and has an iconic status now. He features in the top 10 “Famous Brands of 20th Century”

Syndicate Bank based in Manipal has an Alsatian dog on its masthead with the punchline “Your Faithful and Friendly financial planner”. 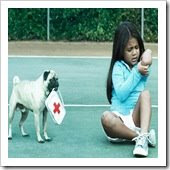 And Vodafone (nee Hutch) has the Pug following his master everywhere attracting a lot of unwanted attention from animal lovers in the process !

Now, back to the dogfight between the Khans.

My good friend Pramod Shankar was deeply moved by ‘Taare Zameen Par” directed by Aamir Khan, simply because of the sensitivity he had shown. I wonder what he has to say about Aamir’s tasteless remark

Looking at the communication aspect (does this sound respectable ?) I’d like to paraphrase a famous adage –” When Aamir Khan talks about Sharukh Khan, we learn more about Aamir than about Sharukh“.

My friend Simi who keeps a tab on Bollywood asks me not to worry. At the end of it all, the Khan duo may pose together gleefully and tell us that they were actually whipping up some excitement to promote a famous dog food brand ! Like the recent Arbaaz– Malaika Khan fiasco where they faked a divorce only to peddle some Ponds vanishing cream ! To be fair, they confessed that they felt miserable doing this and apologised to their close friends and relatives for hurting them !

One upmanship, Visibility, Publicity, Media glare,limelight- call it what you want, there’s tremendous pressure on them to hog the headlines just to stay in business !